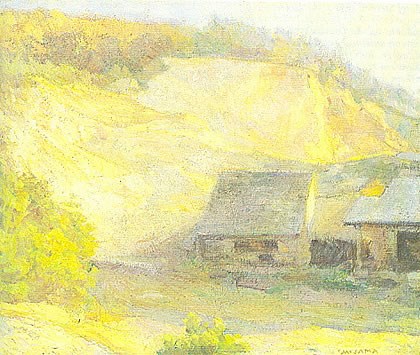 What is a “province”? 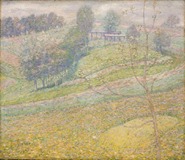 Literally – it is a geographical location, a remote dot on a map distantly situated from a municipal center, and in this sense, province contrasts sharply with the metropolitan area.
Often, however, the word “province and provincial” is used to derive an evaluative attitude. And here the range of its connotations are too wide: from mockery on ‘rednecks’ to the admiration for the ‘authentic reality, unspoilt by civilisation’.

I am looking at paintings of Slovenian impressionists and thinking… Thinking about a good warm-hearted province with its homely atmosphere. Its serenity and phenomenal authenticity. Here, as a hundred years ago, life is characterised by ease, naturalness, fraternity and honesty, fidelity to nature and values from grandparents’ fairy-tales. The province rejects mindless consumerism, mainstream train-of-thought and everything that suppresses soul and personality.

I am eyeballing the scenery of Slovenia – truly, they, impressionists, did not need any special external conditions to create and philosophise, what they needed was only their talent and goodwill. For them, the center that produces inspiration and thought is their-own-selves and the everyday Sun or the everyday Rain of a province; the rest of the world with its factories, streets, teeming with rats and vermin, is somewhere far away from them and appears only once a week in a conversation with the postman. 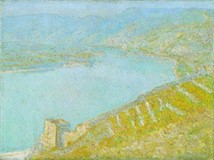 Sometimes, something large-scale and great is better seen on a local scale. Now and again, national impressionism is not less sensitive and less truthful than the Great French movement. The impressionists of Slovenia is an unprecedented perception/expression of colour and light of the muscled Haloze hills, lavender meadows of the South-Eastern Europe, pastel skies of the North-West of the Balkan Peninsula, and eastern spurs of the Alps…

One day I will remember these lines when sitting and observing «real impressionism» at Lavender Farm Slovenia:
http://www.sloveniahalozeholidays.eu/