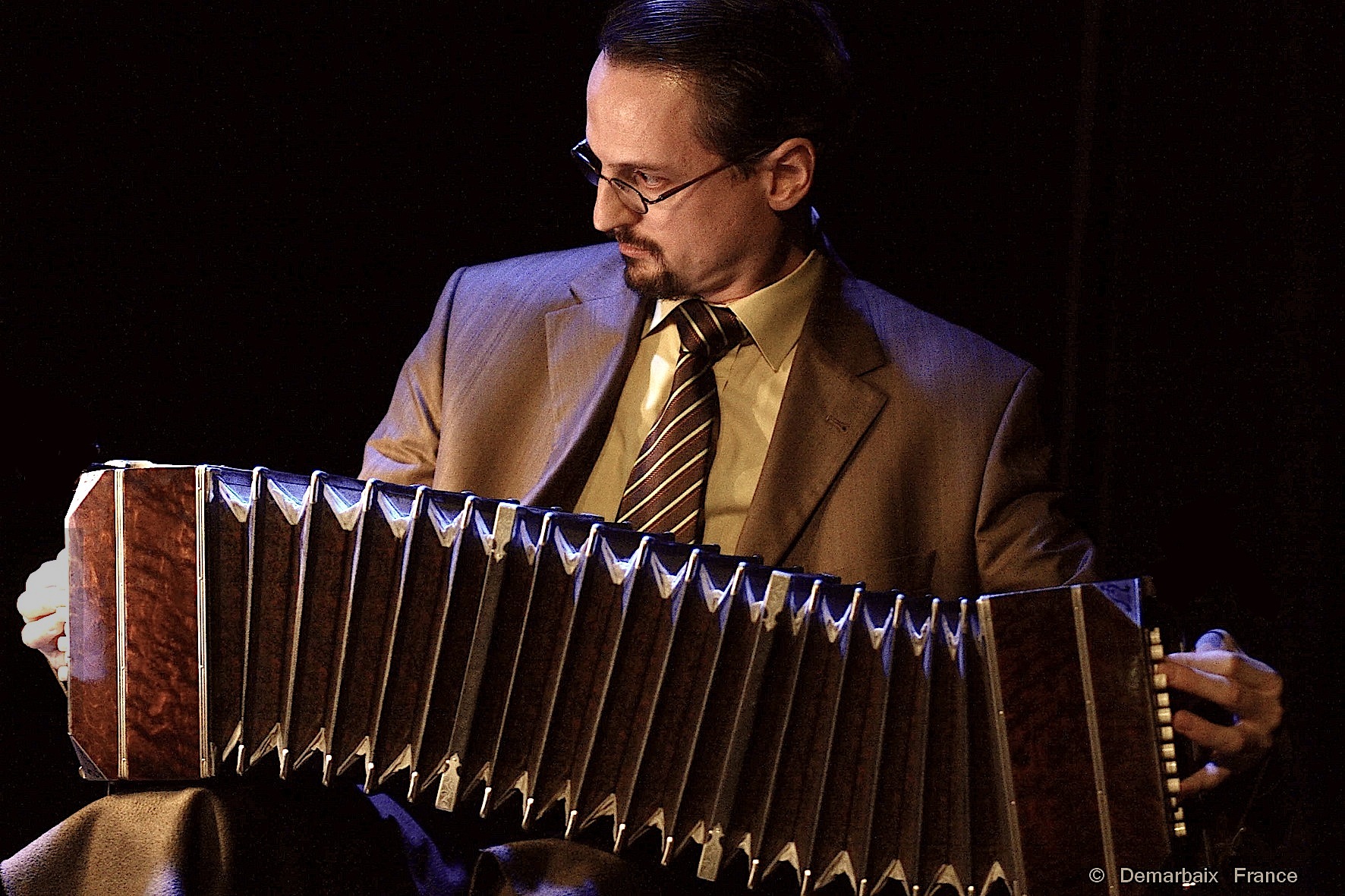 Pato Lorente (Patrick Vankeirsbilck) composes what he lives and lives what he composes. His life and his music are inseparable and his passion for both, contagious. The only permanent pupil of legendary Argentinian Bandoneón player Alfredo Marcucci and his only artistic heir after 18 years of intense collaboration, Pato resides and works in the melting pot of Brussels, constantly escaping to his eco-shed in Spain for ‘moments of disconnection.’ 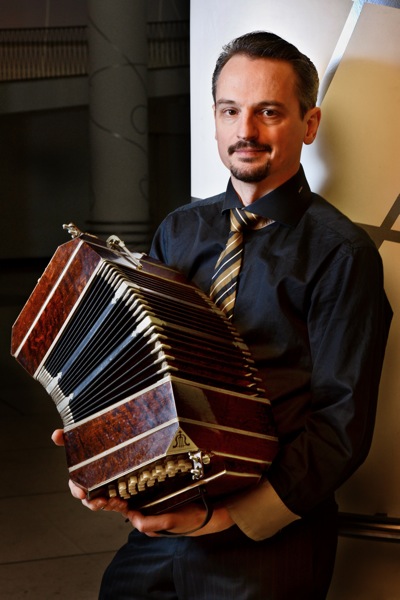 There is a simplicity and symmetry to his appearance: black collared shirt and a colorful tie, slicked back hair in a classic old-school manner, geometric features and glacial eyes. That’s the air of a person who creates and plays the music which the great ballerina Anna Pavlova called erotic and suggested that this music would repulse anyone with a genuine sense of beauty. Tango is an emotional dance in which the man often embraces the woman and leads her, and only when he pauses, does she improvise as her mood suggests. Today, you will learn how this music of passion and surrender is born in temperate latitudes of cloudy Belgium. 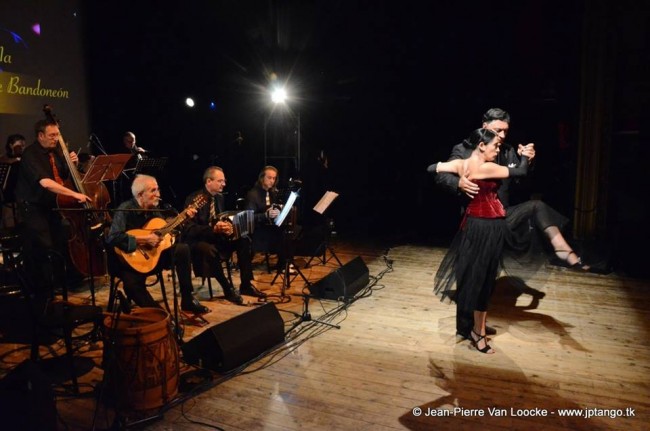 Pato Lorente is one of the most complex contemporary tango music composers. His Belgian heritage gave him a special affinity with music genres and styles. ‘I was raised in Bruges. It was a town with an important cultural life, not a small village with no theaters. It offered me the possibility to discover musical styles and genres while regularly attending concerts. Obviously, my co-students at the Bruges Conservatory also influenced my artistic evolution. I founded with some of them a flute quartet that functioned for about eight years.’

In the early ’90s, he started bandoneon study with Alfredo Marcucci, with whom he frequently performed abroad, sometimes in the company of Luis Stazo (Sexteto Mayor) and Mosalini (orchestra Osvaldo Pugliese). He consistently toured with Alfredo Marcucci until the death of the master in 2010. Marcucci, who played in the legendary orchestras of Carlos Marcucci, Julio De Caro and Carlos Di Sarli in the Golden Age of tango (’30s and ’40s), taught Pato all the secrets of the ‘Rheinische’ bisonoric bandoneon and how to interpret danceable tango music. 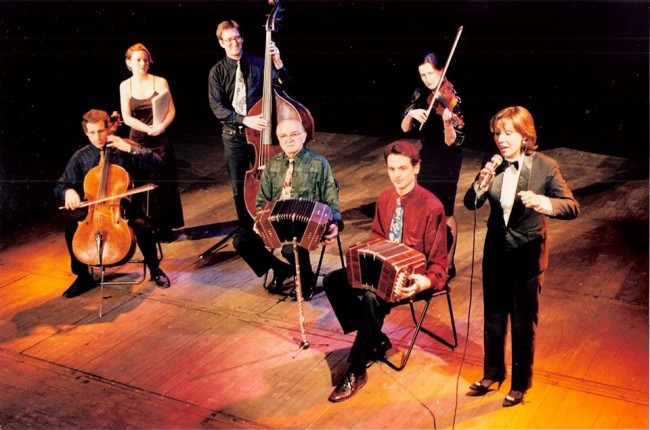 Pato mainly writes and plays music related to Argentine tango, not being afraid of fusing that music with jazz, hip hop and classical music. All of this work is shown in different bands and groups. Three projects that currently carry the artist’s full attention are Rueda Libre Quartet (tango-jazz fusion); El Juntacadáveres (triphop-tango fusion); and BePolAr (tango-classical fusion). Every now and then, he also performs as a freelancer in larger ensembles.

His acute ability to re-engage memories and feelings from childhood result in music of innocence and ravishing humbleness. ‘My parents have always been very humble and authentic. This is what I take with me while making music: trying to be authentic in what I do and touch the audience through that way rather than through superfluous show elements. This being said, my family is all but a musical family. They worked hard and never looked for recognition. My parents never opposed to me studying music but to them all that was new as well, they had never seen in their lives a music school from the inside. I had to find my way in the music education system mainly by myself.’

Pato’s extensive work experience as an engineer and fascination with all things logical and mechanical has had a profound influence on his musical thinking. ‘Outside of music, I am interested in science and engineering. It helps a lot in keeping discipline, and they do often generate my inspiration,’ confesses the musician.

Even though computer-generated music creations are so commonplace, there is still a place in the artist’s creative process for composing music ‘by hand.’ ‘I still do compose a lot without a computer,’ says Pato. ‘Nonetheless, the organic aspect of playing music whereby a live emotional interaction exists with the audience seems to me difficult to mimic by computers/robots. Every musician has his/her own ‘touché’ and that is today impossible to program in a machine.’ 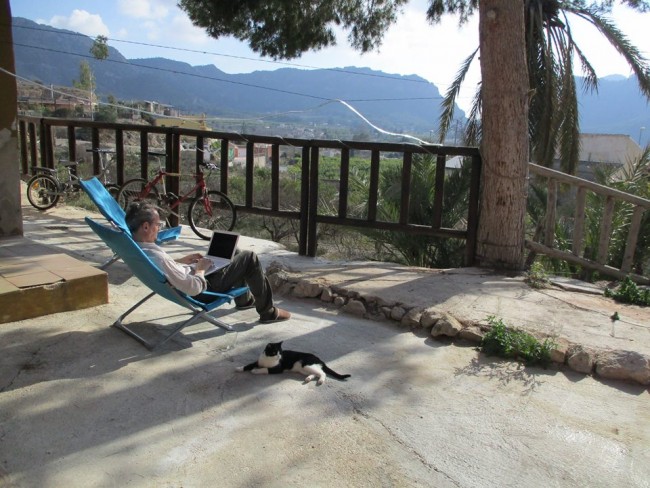 Since 2009, Pato Lorente has been active as a teacher for bandoneon and tango music ensemble in several music schools of the Flemish community. He is, thus, the only bandoneon teacher in official music schools across Belgium and in Europe – the class is also open to children. His thorough training in music theory and composition, both in the classical and jazz idioms, resulted in Lorente’s winning the Dutch ‘Choclo’ Composition Prize for danceable tango music in 2012.

The musician defines the evolution of him as an artist shortly but quite exhaustively: ‘The line here is simple: a process of continuous emotional and intellectual liberation.’ 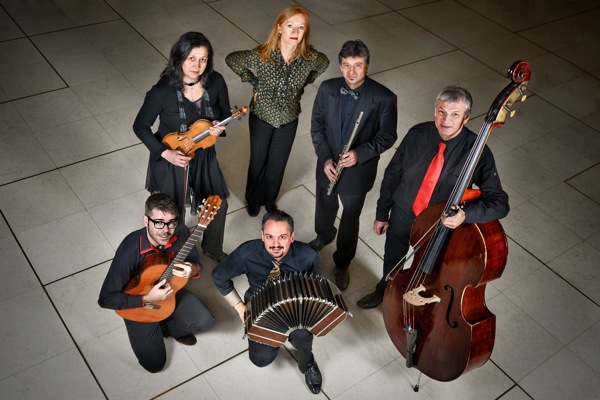 Asked to name some of his favorite music venues in Belgium, Lorente enthuses about Espace Senghor in Etterbeek,BOZAR in Brussels, Sounds Jazz Club in Brussels, De Centrale in Ghent and Théâtre Molière in Brussels.

Explore more of Pato’s music by visiting his website.

Marina Kazakova is a transmedia researcher, poetry visualizer, and a writer. She graduated from the department of Transmedia of Sint-Lukas University Brussels with an art-based research thesis on ‘How to Visualize Poetry.’ Currently, she runs her own artistic production «Seanema».