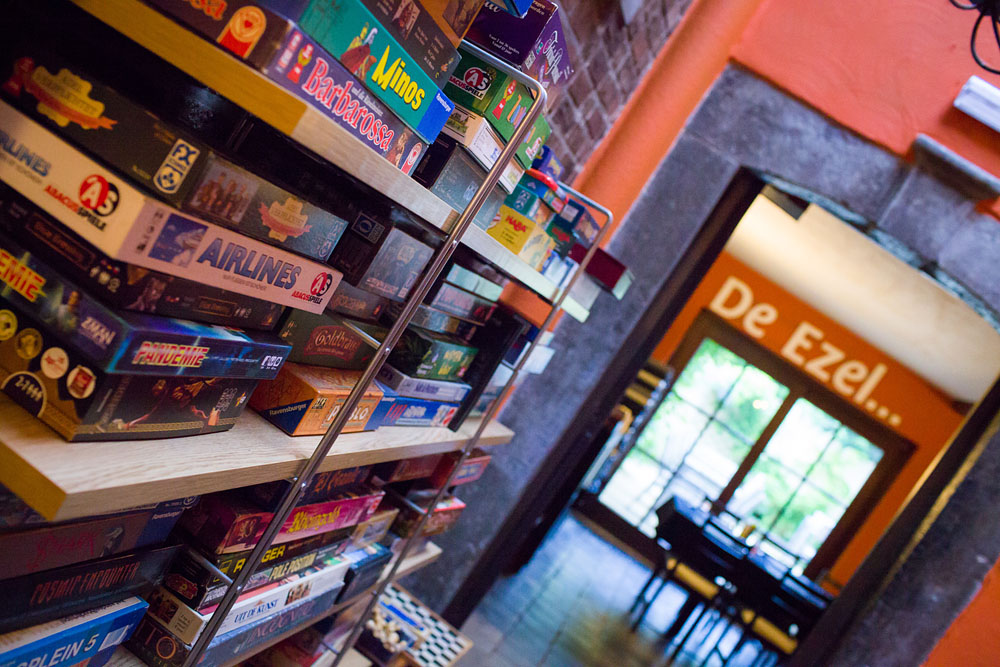 “The Donkey” and “The Cat”: Board Games and Red Hot Spicy Coffee in the Oldest Town of Belgium

It takes time to determine the most inspiring locally-owned cafes in the region where you live, mostly because it requires visiting every place not only once, trying out its menu and atmosphere, getting to know the owners and observing the clientele. Luckily, after years of search, ordinary and awkward “Horeca experiences”, dozens of cross-town terrace trips, we can definitely name a pair of the most heartfelt cafés of Tongeren. To qualify for this, a place has to have been around for years, should have an idea behind, must be known for the attention of its owner, original and distinctive menu and non-tourist approach to conducting its activity. 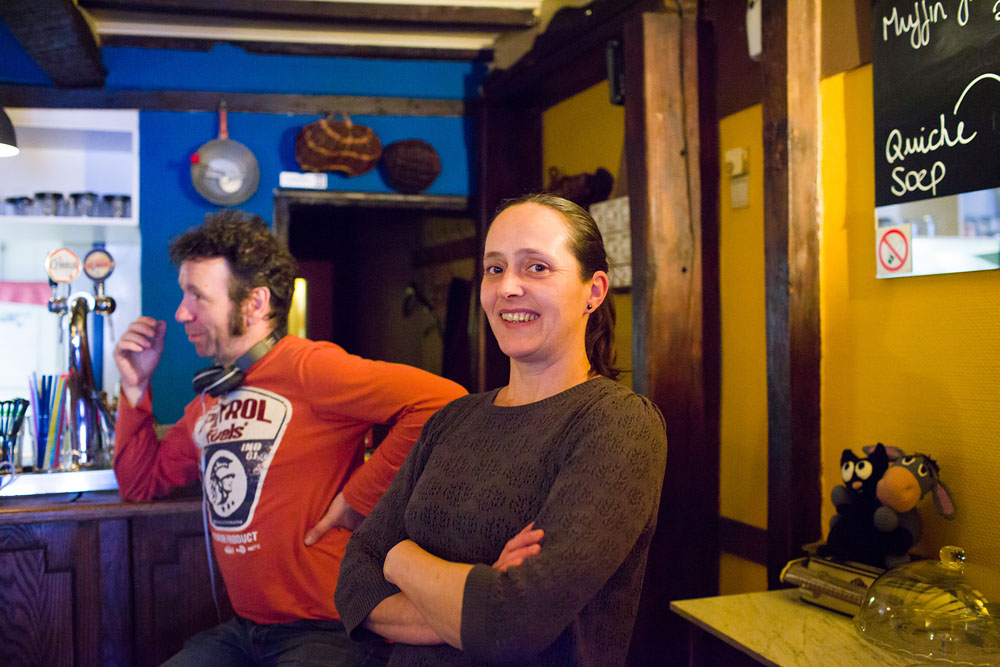 Café “De Ezel” has been around for 11 years, since 2005, owned and operated by Ronnie Vandersmissen, originally from Tongeren. He started out to work in café business, however, much earlier. Many years ago he was a 16-year-old waiter circling between myriads of tables to serve clients at busy town square restaurants of Tongeren. When Ronnie turned 24 he opened his first café “De Classic” which is now called “Splendid”, but within 3 years he went bankrupt. It took him 9 years to pay off all the debts. The man who came close to losing it all leapt in the end onto our ‘most inspiring locally-owned café list of 2016’.

In 2005 Ronnie rented a small place on the Vrijthof Square in the heart of Tongeren. “Historically, it has always been a café. At that time they went bankrupt, and luckily I had enough savings to buy all the equipment for 1800 euros and rent out the place to start my own board-game cafe”, laughs Ronnie. 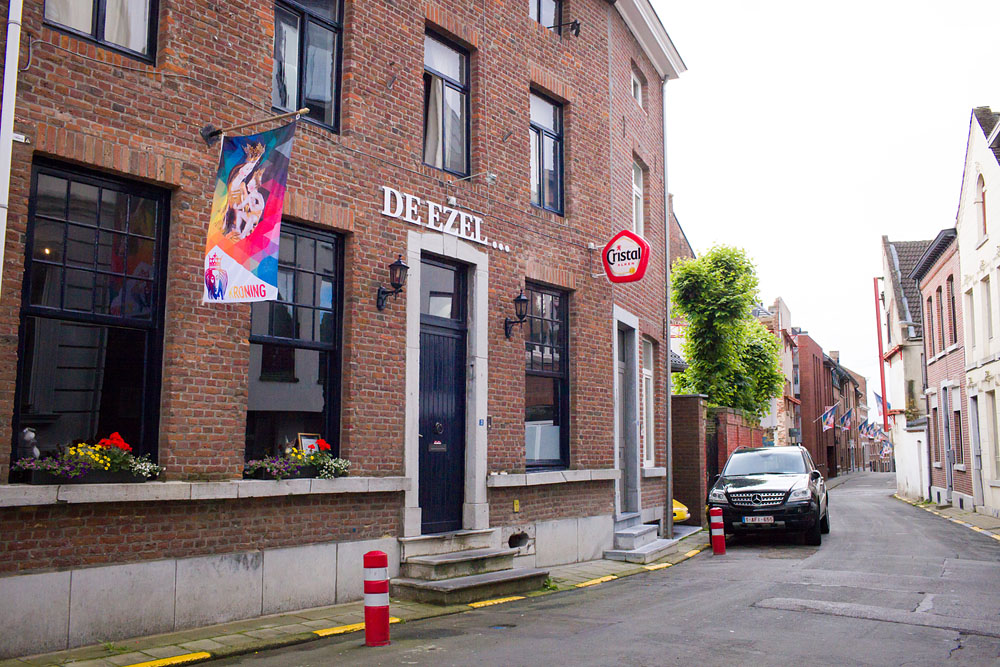 “De Ezel” is very much a neighbourhood place, with locals dropping in throughout the evening. It is one of the most intimate venues around with its homey, laid-back atmosphere, likely one of the reasons customers reach out to “De Ezel” wanting to play a game and have a substantial hand-cooked dinner, not the other way around. Ronnie lives a few quarters from the cafe, 10 minutes by bike, so the place has become his second home for at least 12 hours a day. His workday begins at 11 a.m. when he arrives to prep and it won’t end until after midnight – it’s an attentive casualness that Ronnie believes brings customers back.

He’s sitting on a rustic wooden bar stool at his café on a quiet summer afternoon. It is an approximately 100-square meter ground-floor space in the traditional “brown cafe” style. You can see oil-on-canvas paintings created by Ronnie’s friends tacked on the walls; soft, wooden and clay donkeys around; oak whiskey pub barrels as bar tables; the inox counter holds bottles of suggestion and house wines in front of the head of the cook (Ronnie himself!) in his open kitchen; and of course, a wall full of board games.

“My café’s name came to me suddenly and it ignited everything else”, Ronnie remembers. “One evening we were playing a game when it suddenly struck my mind – this is the name for my café! By the time I opened “De Ezel”, I’ve played thousands of board games from around the world, and an extensive collection of my favorites are now proudly displayed on the shelves here”. 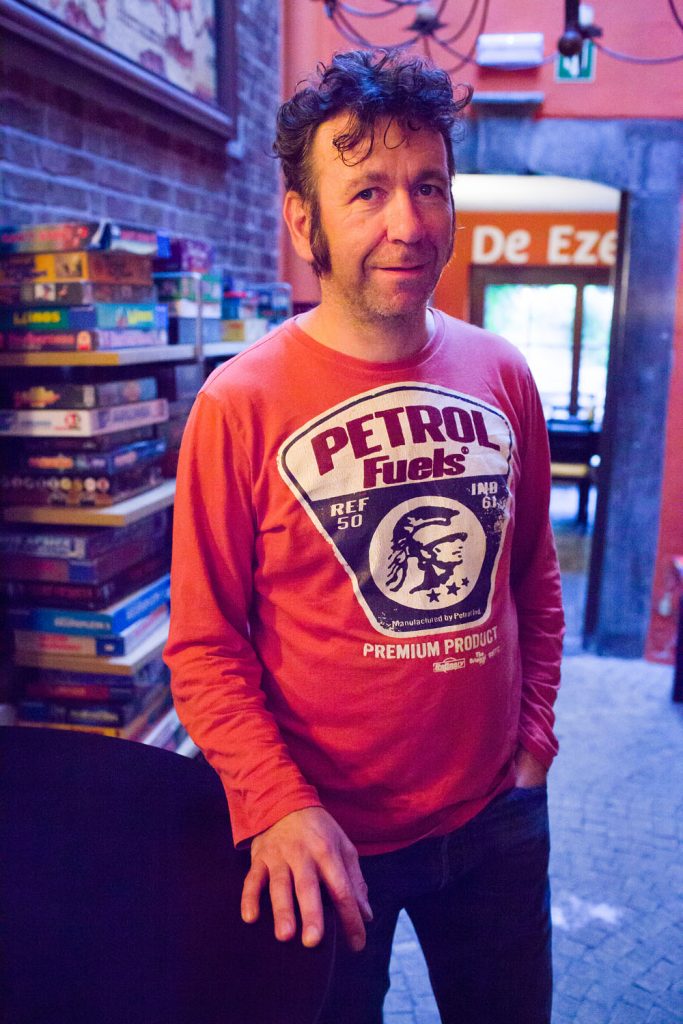 In the past decade, board-game cafes popped up in big cities around the globe. “Canada, US, Germany, UK are thriving with board-game venues”, says Ronnie. “However, most of the places charge customers to play a game. Baristas not only prepare coffee for their customers, but also explain in details the games you choose to play. As for “De Ezel”, we don’t charge customers for playing. Instead, we appreciate those who come not just to eat but also to spend free time in a constructive and entertaining way. This is what actually makes my enterprise special. Tongeren is a big village, and a very conservative one. We try to experiment with food and concepts but very, very carefully”, Ronnie admits.

During the day Ronnie cooks a few dozen of meals, serves his carefully selected beers and wines and stays up with the last of the patrons to finish the game. The guy running the show is always the last to bed.

A locally-run café is locally sourced, quality, fresh ingredients are used in classic and updated Italian pastas. “De Ezel” is well reputed for its homemade meals. “Creating a unique menu is still a hit-or-miss affair. Over the past years, I tried different kinds of menus and dishes, but after all I decided to focus on my best specialty – pastas. I don’t make anything ‘average’. For instance, there is no spaghetti Bolognese in my menu – it’s too trivial. My menu is very short (you can count my pastas on the fingers), but time – and client-proved”. 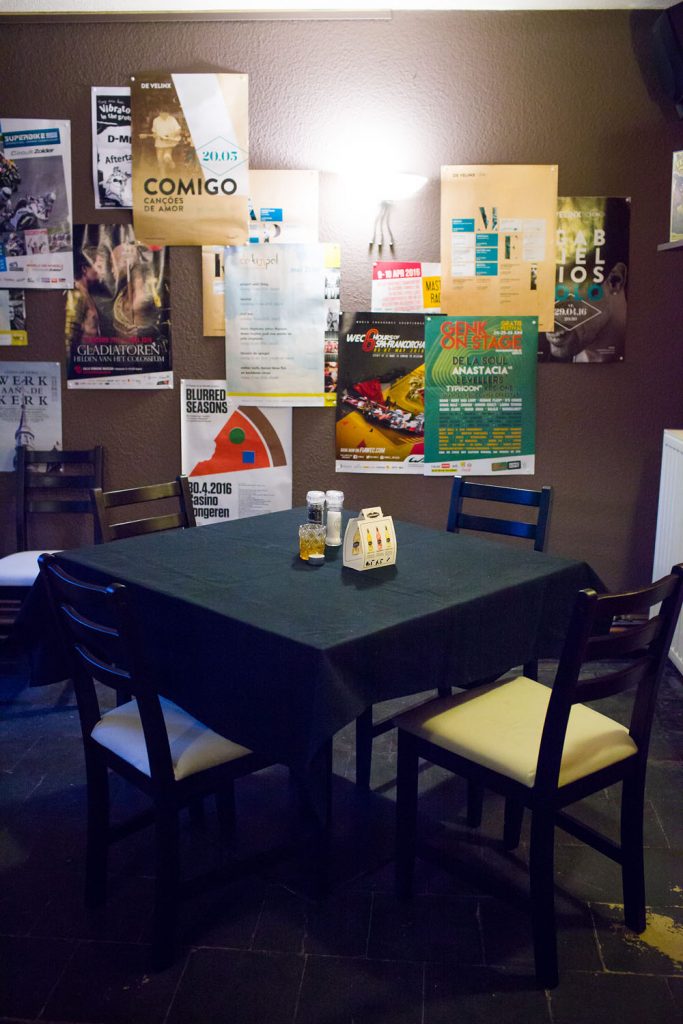 “I believe that those café owners who buy and choose products and suppliers themselves value the experience and interaction with the staff just as much as they value the product they’re buying, and I had this firmly in mind when I opened “De Ezel”. No chain suppliers or sponsored collaborations. Only personal involvement! What we’ve managed to do by this is to create an environment that feels like home”, explains Ronnie. ‘An example of how we selected our wines. We spend a few evenings at the supplier’s in a company of 10 people tasting 30-40 wines. That’s how I created “De Ezel’s” wine list. It includes Spanish, Portuguese, Italian and Australian wines. Nobody ever complained”, smiles Ronnie. “We’ve got suggestion wines: 5 red, 5 white and 1 rosé. Every bottle costs 20 euros. They are exemplary. Besides, we offer house wines, which cost 16 euros per bottle. Also, red, white and rosé option. As for the beer lovers, I am keeping track of my regular clients’ favorites”, he laughs.

The professional journey of Peggy Fransen, the wife of Ronnie, was also not without a cloud. “Since I was 19, I took up weekend jobs at restaurants. I was still a student back then and did dishes to earn some extra money. When I graduated, I began working more hours as a waiter and kept being interested in Horeca business”, says Peggy. ‘For 5 years I had been living in France where I ran an organic farm. That’s how my eco-oriented activities started. When I returned to Belgium, I met Ronnie who was at that moment thinking of finding a bigger space for his incredibly successful “De Ezel” café. The place that he rented could accommodate only 30 people, which was not enough for his gradually growing clientele. We brainstormed and decided to rent a neighbouring building for “De Ezel” and in the former “De Ezel’s” space we opened my coffee & lunch bar “De Kat”. 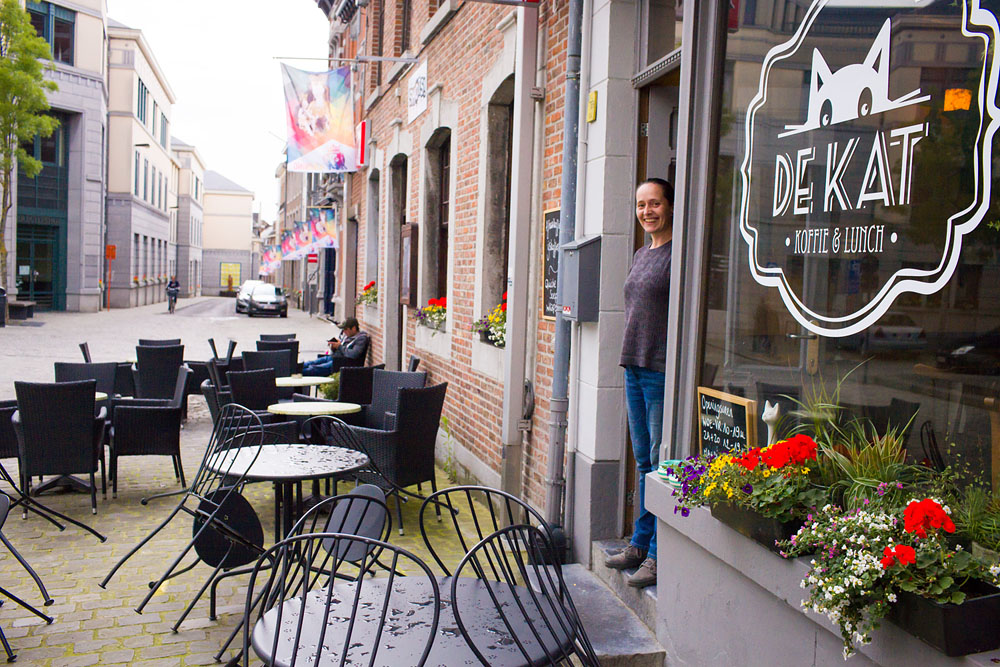 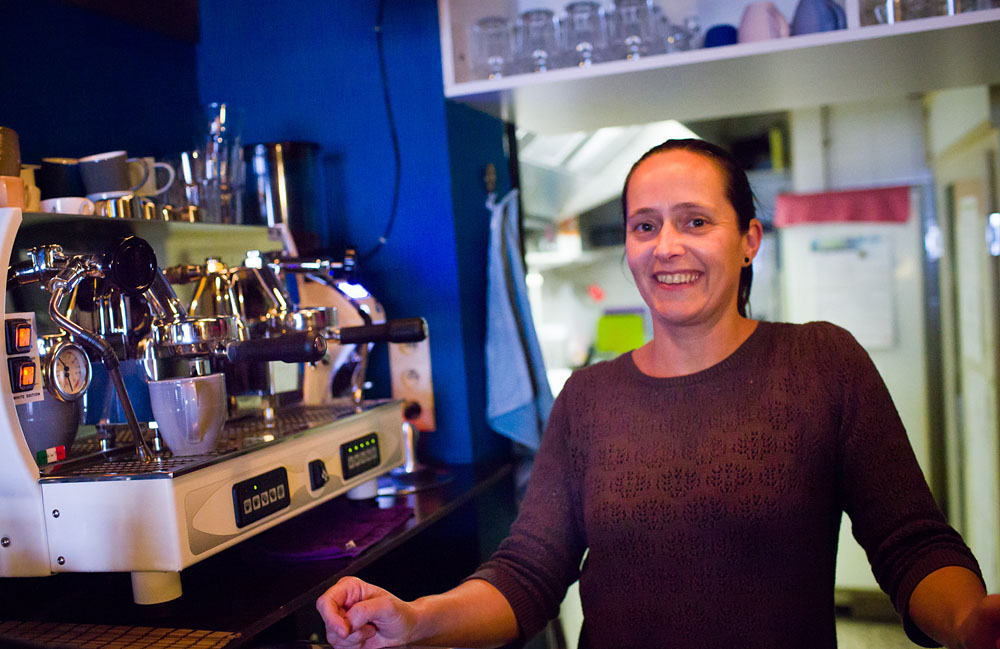 Van-Gogh’s-style yellow walls, wooden chairs and tables just out of his paintings, old wooden beam ceiling – this is De Kat’s atmosphere. It’s a place of cool interlude, you can sit there even if there are only two of you. Nice to while away a sunny afternoon with a few glasses of ice coffee…Yes, the shining star of the place is coffee. It feels from a first sip of my ‘Red Hot Spicy Lungo’ (big coffee spiced with red hot chili pepper) that Peggy possesses an extensive knowledge of an espresso machine “coffee artist”. “I just followed a basic barista course to acquire a knowledge of coffee blends, coffee roasting, how to operate and maintain espresso machines, froth milk and so on. The rest I learned myself,” confesses Peggy. 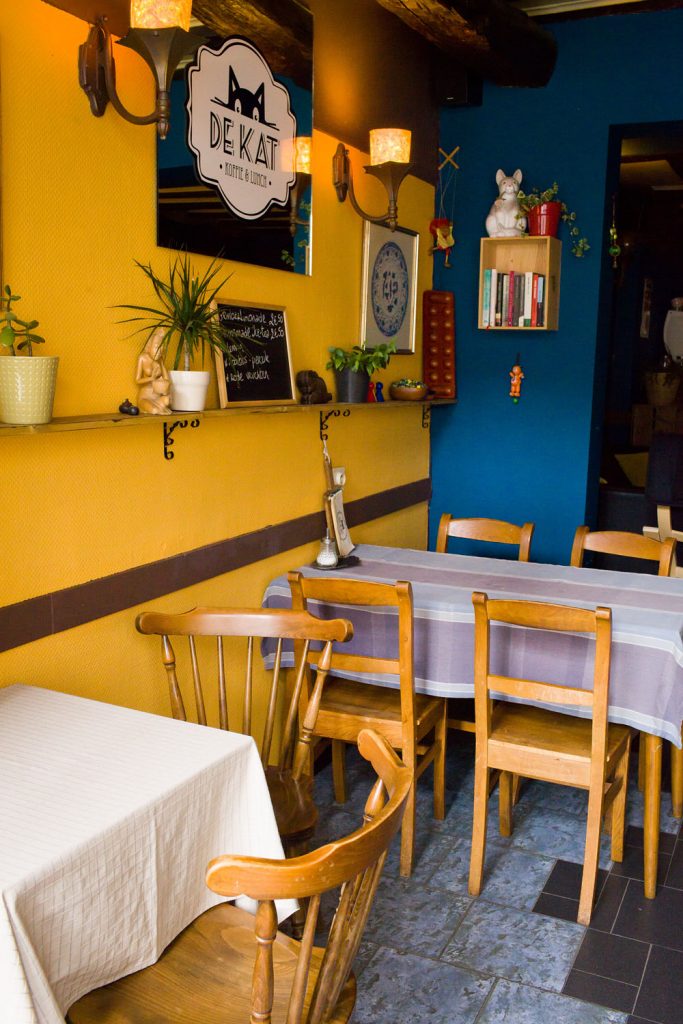 It is very much a peace place, with a nice, homespun feel to it. You can sit at the counter and watch Peggy doing her little magic coffee-cake dance; you can rest in the homey dining room in the embraces of the old soft leather sofa; you can have your meal in the light-filled front windowed area and look out at the Gothic tower of the Basilica of Our Lady that dominates over the square of Vrijthof; or you can sit on an outside street terrace to breathe in a beautiful day. It’s all very, very cosy. 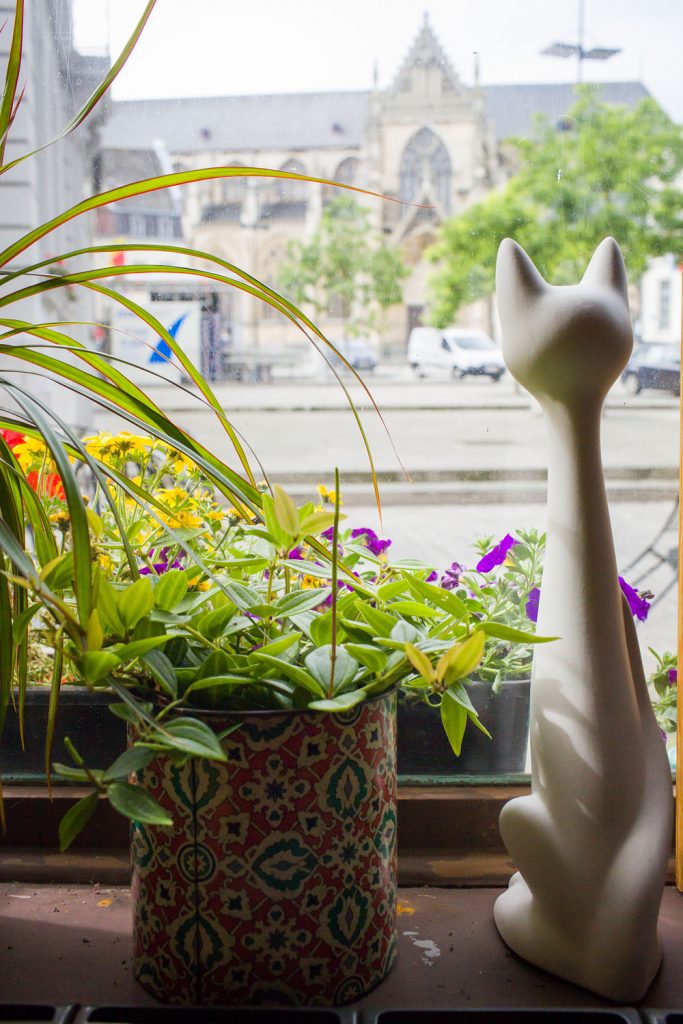 The atmosphere at both cafes all the time is warm and friendly; it feels like owners are your family, and you’ve just stopped in to have breakfast or dinner with them.

“De Ezel” started out as a mere 20-seat cafe, selling fresh meals accompanied by funky board-games. But over the last decade they’ve flourished to the point where they’re now a duo of a full-on local unposh restaurant and an absolutely stunning, ‘impressionistic’ coffee bar. 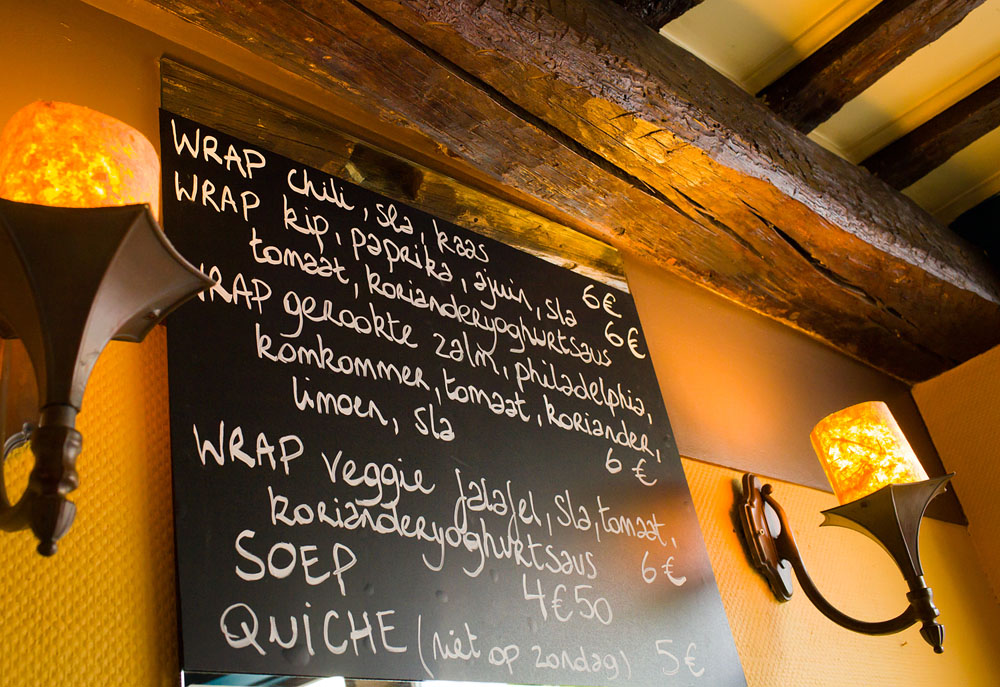 I see people at Ronnie’s-Peggy’s cafés at all hours of the day, and it makes me happy to know such alternative venues are thriving and growing in our little neighbourhood of the oldest town of Belgium.