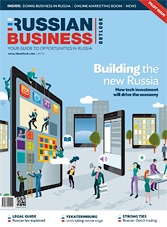 In 1992, a French-Swiss film director Jean-Luc Godard invested into the renovation of the Moscow Cinema City, describing his initiative as a way of paying his respect to Chekhov, Dostoyevsky, Tchaikovsky, Nuriyev, Solzhenitsyn. He has visited Russia many times, but his were not physical voyages. He visited the country in books and music.

Nowadays, a new opportunity to travel across undiscovered Russia attracts both travel industry innovators from around the world and Russian tourists. Travelers today want more than an organised tour or a comfortable hotel. They want a truly memorable travel experience. They treasure the experience, and caravanning is one of the best ways of gaining precious first-hand impressions while traveling cost-effectively.
For those European entrepreneurs who seek new directions for their businesses, caravanning is a vast new market in Russia. A few local companies are now key competitors to outrun by occupying a niche in Russia’s rapidly growing caravan-tourism sector. For foreign businesses, it is the right moment to try out their time-proved strategies.

One of Russia’s longest established caravan importers and distributors, the company AVTOKEMPER was launched by a Russian entrepreneur Yury Yelashkin in 2009, after he had undertaken inspiring family caravan trips through Europe and the US. Today, the company represents ten leading European and American caravan producers in Russia. In the first three years since its launch, AVTOKEMPER has sold 150 caravans. According to the owner, budget caravans with the starting price of $73 500 are the most popular. The statistics show enough room for development. The Russian Caravan League consists of roughly 1,000 members across the entire country and the number of caravans is near 10,000 vehicles, which pales in comparison to European numbers.

The advantages and challenges of caravanning in Russia

Millions of people around the world are willing to experience Russian absorbing and unfathomable history that remained hidden behind the Iron Curtain for decades. Besides being a fulfilling activity, caravanning is attractive because it implies independency from notorious Russian unpredictability. It is definitely one of the most exotic ways to discover this still mysterious land, examining in detail the European part of the country, then Siberia, then the Russian Far East. More than 9,000 kilometers – something to be proud of.
One of the pleasant aspects of caravanning in Russia is the country’s overabundance of public space in particular, that immediately eliminates the problem of parking, unlike the situation with private and municipal property.

Like other emerging markets, caravanning in Russia presents certain challenges, but foremost it offers opportunities. The biggest challenge that slows the market growth is the lack of extensive network of specialized campings, equipped with basic or advanced utilities, where caravans can park overnight. For instance, Yuri Yelashkin, the owner of AVTOKEMPER, has built the first camping in Sokolniki (Moscow), that nowadays hosts an annual caravan exhibition “Caravanex”. The company is planning to construct one more camping in the south-east of Moscow in Kolomna; also the Russia’s biggest biker’s club “Night Wolves” is building another camping in the west of Moscow. This means that caravan-related infrastructure market has potential and will be developing due to the growing demand for caravan tourism among Russians, as well as among European caravan clubs that are willing to experience the famous Russian roads.

European companies interested to start up caravan business in Russia still have several serious advantages over the Russian competitors. They have better industry-specific technology, know-how and innovation capabilities; they have a higher level of management competence in functions such as marketing, construction, financial management and IT, which can be used to grow a strong, well-integrated value chain.

To keep their advantage against emerging Russian competitors, European companies could consider acting on a combination of the following principles:

1. Broaden market coverage. The main target ‘caravan audience’ in Russia is mostly people in their mid 30s-40s, representatives of the middle-class, who can only afford a low-end product. The future is with the secondary cities, Russia’s mass market, that is why if the company wants to succeed long-term, the marketing strategy should focus on building the localization competencies by continuously introducing new products at affordable prices.

3. Initiate industry consolidation. Due to the fact that many Russian industries are highly fragmented by world standards, now is the right time to use the opened up opportunities and to consolidate such industry segments as camping building, caravan distribution, development of the associated infrastructure.

To succeed implementing all or some of these principles, foreign-owned businesses in Russia will have to become smarter and more flexible. Foreign companies will have to face the fact that their experience in caravan industry and superior network performance are not enough to win in Russia. Foreign entrepreneurs will also have to master the complexities of distribution, sales and service in Russia’s secondary cities and rural area. Moreover, they will have to learn how to more sensitively adapt their approach, be it products and processes or marketing messages, using ways that will allow them to fit into the pool of peculiarities of Russian market-competencies in which their local competitors are already far ahead.

We use cookies to ensure that we give you the best experience on our website. If you continue to use this site we will assume that you are happy with it.Ok