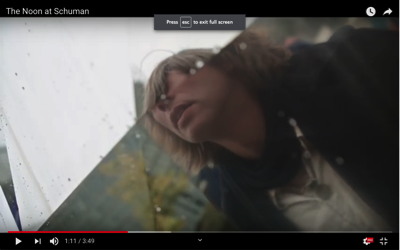 Film-poem “The Noon at Schuman”: poem’s rhythm expressed in film and soundtrack

The initial artistic imperative was to try to express the rhythm of the poem in the visual imagery of the film medium: editing, acting, plot and setting.

I’ve briefly explained the views of S. Eisenstein and A. Tarkovsky on rhythm in poetry and rhythm in film in the previous article.

Now, directly to my experiments: the film-poem “The Noon at Schuman”.

This film-poem is a collaboration with a documentary filmmaker Diren Agbaba and musician Slow Bear. Diren was a cameraman of ‘The Noon at Schuman”, in which we tried to express the poem’s meditative rhythm through a well-prepared storyboard (Eisenstein’s approach), well-thought in advance camera movements: long takes, static composition, minimal action and intellectual montage. The meditative mode of the text and the meditative rhythm of the visuals give us time to look – at faces and bodies, at the cityscape, at what’s under the protagonist’s feet.

Although, the shot duration (long takes) was one of the parameters among many to define the rhythm of this poem, the close-ups and slow-motion movements of feet were also to determine the rhythm, I consider this experiment a ‘lesson to learn from’ since the film-poem instead of reflecting the meditative mood of protagonist, carefully and distantly documents him strolling around Schuman creating an impression of a documentary rather than a film-poem. 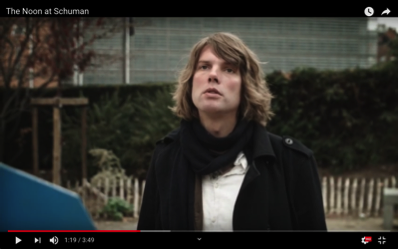 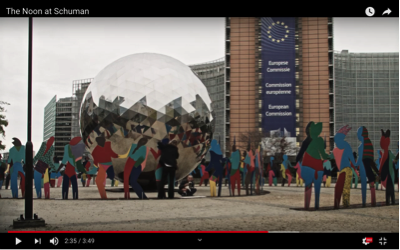 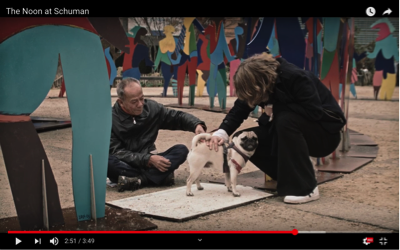 The second research imperative was to compose a music piece that expresses the sound and rhythm of the poem. The music was created by Slow Bear.

When Slow Bear describes hearing music in my poems, he is talking about my tonal inclinations and the sense of rhythm when I am delivering the texts. When he adapts a piece of my poetry into a musical composition, what happens is that he composes melodies based on the imagery that the text instills in them and also my audio recording of the text, which makes this an expression of his own and not a literal translation.

What links music and poetry is an under-sound or an under-song. In every poet’s voice there is a register to which it’s tuned. That’s about the real equivalent, a sense of everything tuned to a certain musical register. According to Liam O’Flynn, an Irish uilleann piper who collaborated a lot with the poet Seamus Heaney, “if you take Shakespeare’s sonnets they are pitched at a certain level. If you take Milton he’s pitched at another level. Milton is an organ. Emily Dickinson is a violin. Yeats is trumpets I suppose!”.

At the heart of our collaboration is the notion that poetry and music are two methods of expression which are very intimate and there’s a lot of intuition and instinct involved which is being proved by us daily.