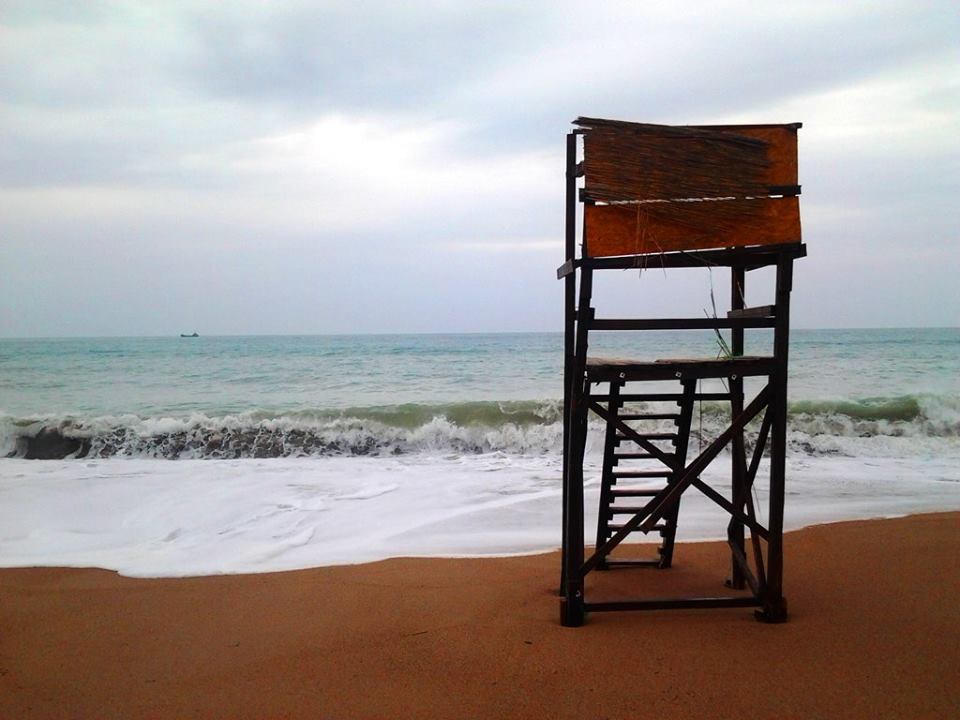 An article for those who constantly miss the sea

Whilst there are many sea vacation proposals offering passages around the world there are few if any that can compare in terms of originality and pure imagination to fiction films and literature. You don’t have to go further than your sofa to be swept out to sea by a good film or a book. Fiction travelling opens the door to a world of wonders, rich in history, culture and natural beauty. These phantasmagorical tours span the globe following various types of itineraries by such a means of conveyance of passengers by pages of books, camera shots or brush strokes that capture the true essence of your destination. 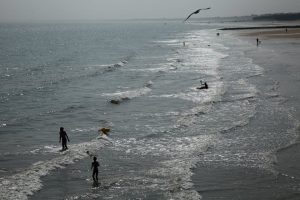 Dreams about the sea come mainly to the people of the plains and forests, cities and countries – places which the aromas of salt and iodine reach out only through a home cinema screen or paper books. Who knows, maybe it is even better – to not live beside the sea, to be in constant anticipation of encountering it, to thoroughly lay out the scent of its aquamarine, note by note. Perhaps not always being close to the sea is really worth it since this is the only way not to lose the sense of it as we do not notice the smell of our own body because we live with our personal odour all the time.

The sub-essence, sub-surface power, ponderous permanence of the sea attracts an unaccustomed eye and disarms it. But how to get through this endless ‘time away from the sea’? Today we will discuss several films and books via which the viewer/reader can easily “commit” a desired voyage to the sea in just 10 minutes’ time.

Destination: An Italian island of Procida in the Bay of Naples.

Lying barely 3 kms from the mainland, the Italian island of Procida (smallest and least touristy island in the Bay of Naples) is known for its charm that has led to it featuring in a number of films including the classic ‘The Postman’ and ‘The Talented Mr. Ripley’.

Cinematic minimalism delicately flavoured with verbal and visual metaphors – this is one aspect that strongly characterises ‘The Postman’. The film is the journey of the main character Mario towards self-discovery through his friendship with a famous Chilean poet Pablo Neruda, a communist who fought for world unity and peace, persecuted in his own country and forced to seek refuge on the island. Mario works as a postman for the poet, trying to get to know Neruda and to find his own poetic voice.

The appeal of this remote sun-kissed region, where the movie is set, is difficult to define in words. Therefore, when Neruda asks Mario to say something special about the island into the voice-recorder to capture his memories for the future, Mario cannot find the right words. Only at the end of the film, at the highest point of dramatic tension, Mario ‘paints’ a sound portrait of the island. He records the voices: of small waves, of big waves, of wind at the cliffs, of sad fishing nets, of the starry island sky, – creating his own ‘Song for Pablo Neruda’.

Throughout the film the sea, its physical beauty and spiritual essence, forms not just a backcloth to the story of the friendship between Neruda and Mario, but it becomes the protagonist of the film – the sea develops into the central figure of the narrative, it turns into a materialised poetic voice of Mario.

When Neruda returns to the island some years later, he learns that Mario is dead, and listens to the sound poem that Mario composed especially for him. The camera moves away from the shore into a wide shot, so that the figure of the poet gradually becomes smaller, dissolving in the vastness of the sea.

The director Eric Rohmer is a ‘writer in cinema’, the actors and the setting is a ‘moving life’. What makes the cinema of Eric Rohmer special is that it is not an audiovisual art in the classical sense, but rather a visual and a verbal living canvas: the setting has nothing to do with characters or verbal action in the film.

In the ‘Summer’s Tale’ the actors move freely within a splendid sea scenery, breathe in unison with a viewer the salty air of summer, think out loud while walking, eating, dancing on the living aquarelle of a marine painter Eric Rohmer.

The regisseur uses the camera motion to show where the characters go without changing the frame, simulating their gaze, – that is how we observe the seascapes of Brittany while listening to long-lasting thought-provoking dialogues of the characters.

But! The first 7 minutes of the film came as a surprise – a complete absence of speech – for 430 seconds the protagonist is in silent communion with the sea.

Sand and seawater in the ‘Summer’s Tale’ possess a solid, tactile quality – the viewer almost gets goosebumps when observing the wet sand grains and chilly atlantic seawaves. Those of the spectators who do not get pleasure from philosophising, will definitely enjoy a visual trip to the gorgeous beaches of Brittany.

Alexander Sokurov ‘Elegy of a Voyage’

Destination: From Russian snows through the black waves of the North Sea into the painting of Peter Saenredam ‘St. Mary’s Square’ at the Museum Boijmans Van Beuningen in Rotterdam.

Why do some people dream of the sea: because the ‘sea’ is a sort of materialized, achievable paradise, known and real. For Alexander Sokurov the ‘sea’ (read ‘dream of paradise’) is the painting of Peter Saenredam ‘St. Mary’s Square’, that comes true at the end of his voyage and which, as it turns out, he had known all his life, even long before he was born.

The journey of the one and only protagonist lies through the snowwaves of his childhood village in Siberia, in the chilly moonlight across the dark sea of white trees bent under the weight of snow blankets, over the black coffee waves of the marginal North Sea, against pointillistic wet strokes of snowflakes…The narrator takes a trip from the frigid silence of present into the warming voices of the past, flitting between the two worlds: the real and that of art.

The viewer dives into the sea of the 16th century Dutch paintings obediently following the steps of Sokurov. The arrival of the ship after a long separation, people ford the sea to meet their loved ones – comprehensible happiness, simple joy. Then, silence – rarely broken by a sea wave. On the next painting is a boat, full of people. The sea of voices fulfills the canvas. Afterwards, another one: windows, windows, windows, then slowly from a close-up to a wide shot – the Tower of Babel appears. Suddenly, the warm wave envelops the room: the feather clouds are trembling on ‘St. Mary’s Square’. The breathing sky over the dead world underneath.

The film spectator satisfies his yearning for a voyage through time and space. Voyage à deux with Alexander Sokurov, a Russian genius of the cinema. 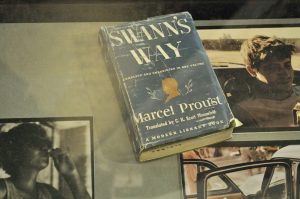 We are sitting at Balbec beach, a beach without equal when it comes to history. Balbec is a fictional prototype of Cabourg, a town near the sea in the Basse-Normandie region of France where Proust spent summers at the Grand Hôtel.

We are back in time, when the fashion of bathing in the sea spread like wild fire among the aristocracy. There is no other beach in the world where tourists wear not just swimming suits, but bathing costumes. It is the only resort town, where people are most of the time dressed rather than naked. Moreover, well-dressed!

The 4 peaceful kilometers of seafront setting include a local casino, where at the height of the season a bridge championship takes place and where men are not allowed in wearing shorts; individual beach cabanas with the names of the owners which can be booked for six months before the onset of the season; private Victorian villas with chic tennis courts; a racecourse where at about seven in the evening magnificent horses start their promenade along the edge of the sea, and the dawning sun paints them in impressionists’ colors.

In the afternoon, before tea-time, we are sitting on the Grand Hôtels balcony watching the sea and listening to Proust: ‘I have always tried while observing the sea to remove from my sight not only the people bathing on the foreground, but also the yachts with their bright white sails, reminiscent of the white holiday costumes, and everything else that distracted me from believing that in front of me are those everlasting waves that have been rolling here one after the other, full of mysterious life, long before the appearance of the human race.’ 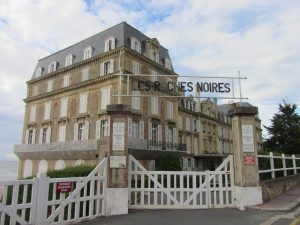 Two characters, a famous French 66-year-old writer Marguerite Duras and her 28-year-old lover Yann Andrea, are drinking wine. They are here, in their room at the hotel ‘Les Roches Noires’ in Trouville. It is a beautiful deluxe room with two bathrooms at the 19th century palace, where young Marcel Proust regularly stayed with his grandmother before they moved to ‘Grand Hotel’ in Cabourg. The Prousts rented a room overlooking the sea. The characters of ‘Cet amour-là’ prefer the other side. For them, to see the sea all day and all night is not appealing. When they want to enjoy the view they go downstairs to the legendry hall of ‘Les Roches Noires’. There, they sit in big chairs surrounded by mirrors, in front of the large open French windows overlooking the Atlantic.

At night they walk. Always following the same route: either in the direction of Honfleur or towards Cabourg. Sometimes they go for a ride to Le Havre to watch the sea, the ships, the seagulls, and to breathe the air. They drive in her Peugeot 104, singing ‘Blue Moon’, a song played everywhere at that time on the piano, sung in all vehicles on all the roads of Normandy. Then they return to the hotel to write another of her books. It lasts for 16 years until she must go forever to the cemetery of Montparnasse to see the sea, to reach the ends of the earth, to throw herself into all the oceans at once, to leave the world in order to take another long journey before attaining her dream.